With the official start from the medieval Akershus Castle centrally situated in Oslo, the first stage will take us past the green valleys and blue lakes of Ringerike to Fagernes near the mountains of Valdres.

The next stage will include the 'Golden Route' which encompasses some of the world's most dramatic and beatiful driving scenery.

After crossing the Valdresflya we enter the famous steep turning old road to Geiranger; a summer road which usually opens around the end of May.

From Geiranger we continue up the turns of the Eagle road and down Trollstigen; the most spectacular stretch of road in Norway. 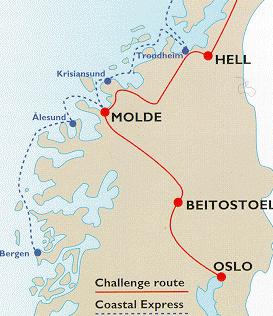 A short ferry journey will see that we reach beautiful Molde by the Romsdals fjord. From Molde we will pass through the massive Trollheimen mountains towards Oppdal through Trondheim and the to Hell.

The leg between Hell and Mo i Rana encompasses innumerable views of deep fjords, impressive water falls and the crossing of a mountain plateau.

Before reaching our destination, the striking view of the glacier Svartisen will come into sight. 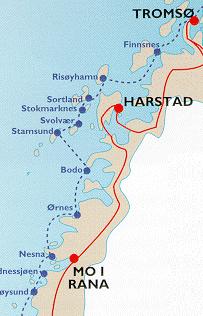 North of Mo i Rana, we will cross the Arctic Circle and the Saltfjellet mountains before entering the fjord and the mountain stage through the beauty of the wild country North of Fauske. A ferry will bring us to Harstad situated on the islands of Lofoten.

From Harstad there is a shorter stage to Tromsř. Aptly named 'Paris of the North', this is the city where the sun never sets, at least during summer.

The stage between Tromsř and Alta takes us along rugged fjordscapes culminating in the Lyngenfjord and the Lyngen alps. Further north barren coasts alternate with forested inner fjord regions towards Alta.

The last leg of the rally itself will take us through wild and dramatic country, along fjords, through gorges and over mountain plateaus where the landscape and plant life has a true arctic character.

A short ferry trip will bring us to Honningsvĺg from where the North Cape is only 30 km away.